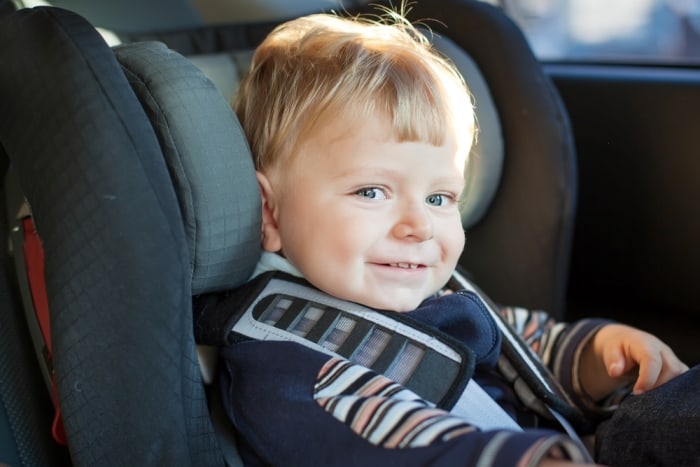 The state of Alabama has mostly recommendations for keeping your children safe while in a moving vehicle. They recognize that approved car seats will have their own height, weight, and age recommendations for each type. The state recommends that all children under the age of 13 ride in the back seat of the vehicle and they require that all children be in some type of restraint system any time that they’re in a moving vehicle.

Starting in 2006, the Alabama car seat laws were revised to make sure that children are even safer while riding in a vehicle. These laws met or exceeded national safety standards. In most cases, certain age and weight requirements must be met so that the child is as safe as possible and they also recommend that you get a DOT-approved car seat that is no more than six years old.

All babies up to the age of one or who weigh less than 20 pounds must be in rear-facing car seats in the back seat of the vehicle. Rear-facing car seats do a better job of supporting a baby’s head and neck in the event of a crash, which is why this recommendation is in place. You can keep your baby in a rear-facing car seat until the age of two but once the child reaches the maximum weight limit set forth by the manufacturer of the car seat, you should move up to the next type of car seat.

Front-facing car seats are meant for babies who are older than one and who weigh up to 40 pounds. In fact, children can stay in front-facing car seats until they reach five years of age or a weight of 40 pounds., which is when they should switch to booster seats. You should also make sure that the car seat is DOT-approved and has a five-point harness system because these harnesses will keep your child from being thrust forward and being injured if you get into an accident.

To put your child in a booster seat, he or she must be five years old or older and weigh a minimum of 40 pounds. You should also choose the right type of booster seat, which includes:

Since 2006, the following laws and recommendations regarding height and weight for car seats were instituted in the Alabama car seat laws:

If the above recommendations differ from the ones specified by the maker of your particular car seat, you should stick to their recommendations instead. This is because all car seats are made differently and the manufacturer of that car seat will make sure that you get the recommendations you need to keep your child as safe as possible at any age.

The state of Alabama began their seatbelt and car seat laws in 1982 and made their last revisions in 2006 to keep children and adults even safer. Today, Alabama is a primary seatbelt law state, which means that the authorities can stop you simply for not wearing a seatbelt and assess you a fine. Since 1999, the state has required that the driver and front-seat passenger be restrained with a seatbelt and they require children under the age of 15 be restrained even if they’re riding in the back seat of the vehicle.

A fine of $25 is usually assessed for anyone who isn’t wearing the proper restraint system and for those drivers who don’t have young children buckled up in an appropriate child-restraint system. In the state of Alabama, drivers have a 54% chance that they will be involved in an automobile accident at some point in their lives, which is why they are trying so hard to get more people buckled up.

Regarding the seatbelt and car seat laws in Alabama, there are a few exceptions to the laws. These include:

Other than these, however, the seatbelt laws are taken seriously in the state of Alabama. A new law was passed in mid-2019 stating that even adults in the back seat of a vehicle will need to wear seatbelts while the vehicle is moving. While some may disagree with this law, it is yet another step that the state is taking to keep its citizens even safer while driving and riding in cars.